Over the years, “Nashville” has evolved into several converging (and diverging) plot lines, but the original wellspring for the show was the dynamic confrontation (and competition) between two country and western singers – the reigning queen of Nashville, Reyna James (played by Connie Britton) and a young, upstart pop star, Juliet Barnes (played by Hayden Panettiere). Although neither actress is a professional singer, they both hold their own in a fierce rivalry that explores both the glory and the under-side of the music profession.

Along with the authentic backdrop of Nashville, and the city’s highly developed artistic music scene, the show has also capitalized upon several highly likable (and believable) characters, beginning with Reyna James’ first real love-interest and side-man, Deacon Claybourne (played by actor/singer Charles Esten). Of course, Juliet Barnes has a love interest as well, musician and producer, Avery Barkley (played by the well-known General Hospital soap opera star, Jonathan Jackson). There are several others, many of whom have turned into fan favorites, such as the young (and highly talented) duo Gunner Scott (played by the British actor, Sam Palladio) and Scarlett O’Connor (played by the Australian actress, Clare Bowen). How they’ve managed to shed their true English accents and sing like born-and-bred southerners is beyond my comprehension.

“Nashville’s” first season with CMT generated a Live U.S. household rating of .39 (good for a .70 share). Both figures are roughly 50% higher than CMT’s average primetime viewing in the show’s 9pm time slot. But perhaps the real ratings story is the level of DVR activity, which raised the Live-only rating by a factor of five (after 15 days) – a sure sign of viewer interest and engagement in this heart-felt music drama: 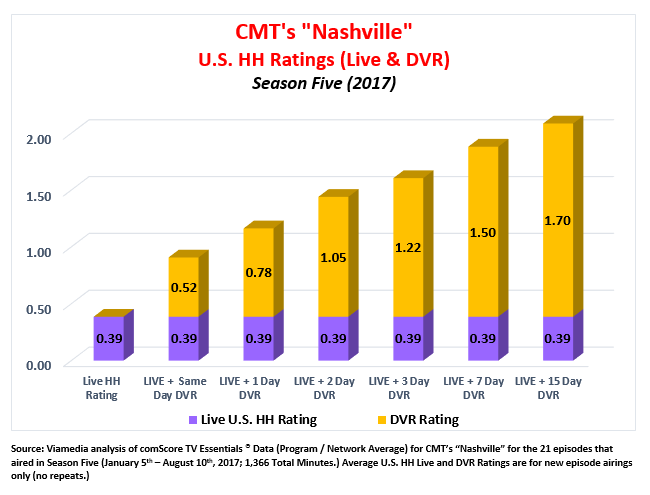 In the chart below, we selected the Top 25 DMAs with the highest ratings for “Nashville” through the first five episodes of Season Five (2017). Given that the show is about the Nashville music scene and is actually filmed in the Music City (capturing several famous Nashville landmarks), it comes as no surprise that the DMA of Nashville captured the very highest rating (out of 200+ television markets). Indeed, four of the six highest rated DMAs are in the state of Tennessee; and, while there is certainly a southern market skew to the show, a more distinct viewing pattern is that “Nashville’s” appeal is to the entire central belt region of our country, stretching from the north (Minnesota and Wisconsin) to the south (Mississippi and Alabama). In all, three-fifths of these markets are represented by Viamedia: 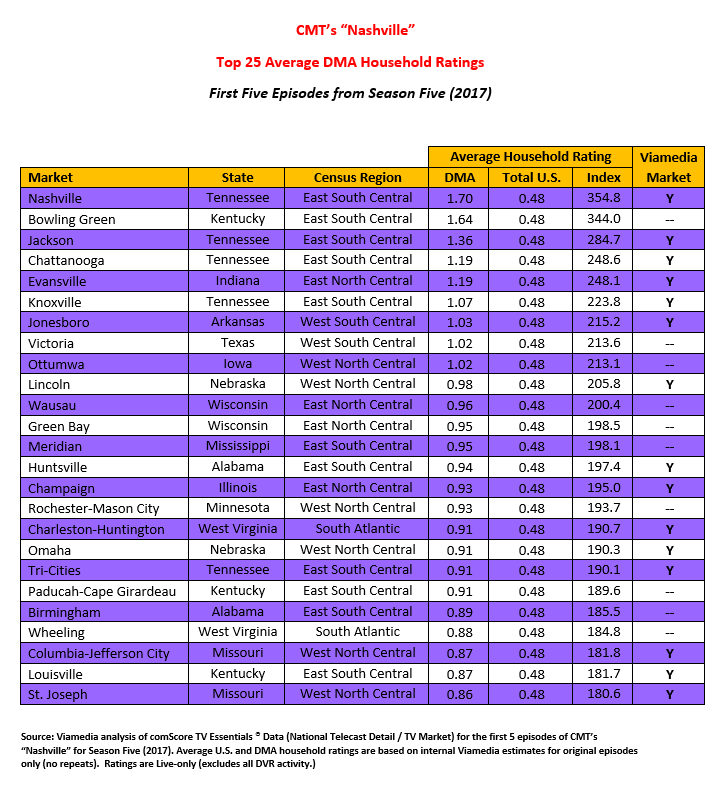 CMT’s “Nashville” has been on air for only one season, so we have no baseline comparisons to quantify year-over-year sales metrics. But based on records we have for other first year shows, “Nashville” received fairly strong support in its inaugural cable season. All in all, the show attracted nearly 60 advertisers who ordered 400 spots across 26 Viamedia markets (about one-third of Viamedia’ s national footprint.) That comes to an average of 6.8 spots per advertiser.

In terms of local market advertising categories, we typically find Automotive capturing the largest share (by far) -- but not with “Nashville” (just 5%). Supplanting Automotive are the categories Furniture & Floor Coverings and Retail & Department Stores, both of which accrue 27% of all local cable advertising – a figure five-times what we normally see for these two categories company-wide. Also over-represented is the Lawn & Garden category at 12%: 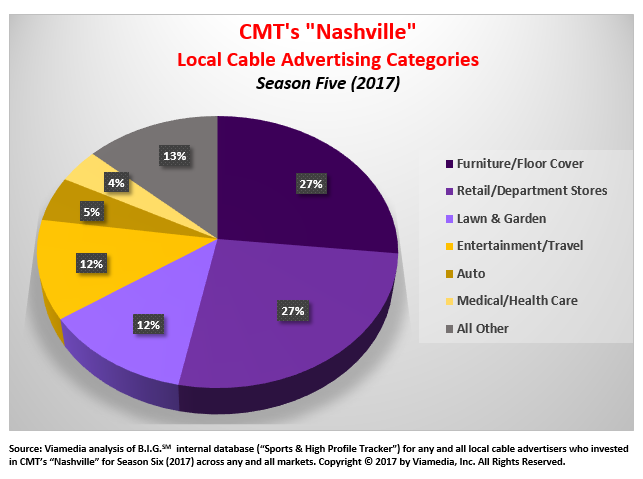 Not too long ago, CMT placed a big bet on “Nashville” as it moved toward airing more scripted programs, which now include “Still the King” and “Million Dollar Quartet.” According to CMT president, Brian Philips, “…it’s a natural evolution of the channel… (moving) away from lighter reality fare… to scripted (programs) that embrace music (to attract) a broader audience.”

But CMT’s strategy hit a bump in the road. I’m not sure of the exact timing, but  “Nashville’s” biggest star, Connie Britton, decided to call it quits, so the writers had to “kill her off” mid-way through the show’s inaugural season on the network. (Incidentally, the hospital scene was a real tear jerker). The loss of Reyna James has now been followed by news that Season Six is “Nashville’s” last hurrah. If the writers and directors are wise, they will stick to a formula that has worked so well for the entire series; that is, allowing the characters and plotlines to develop logically and organically. Easier said than done… but if they accomplish that, I guarantee “Nashville’s” long, winding narrative will be brought to a memorable end.