Surely the Winter Olympics require no extra drama… the Games themselves will provide plenty of that with ninety nations sending 3,000 athletes to PyeongChang to compete in 100+ sporting events across fifteen different disciplines. And crowning it all will be the opening and closing Olympic ceremonies, as well as all the other celebrations in which 300+ medals will be awarded to the greatest athletes in the world.

How does the NBC Network and its affiliated cable networks bring all this into the American home? Well… they turn on the cameras and just let ‘em roll morning, noon and night! Four years ago (at the 2014 Sochi Winter Olympics), NBC broadcast 176 hours, with double that amount (359 hours) spread over four cable networks: NBCSN, MSNBC, USA and CNBC. In all, 535 hours of programming – that’s something like twenty-two days of Olympic content compressed into a 17-day window: 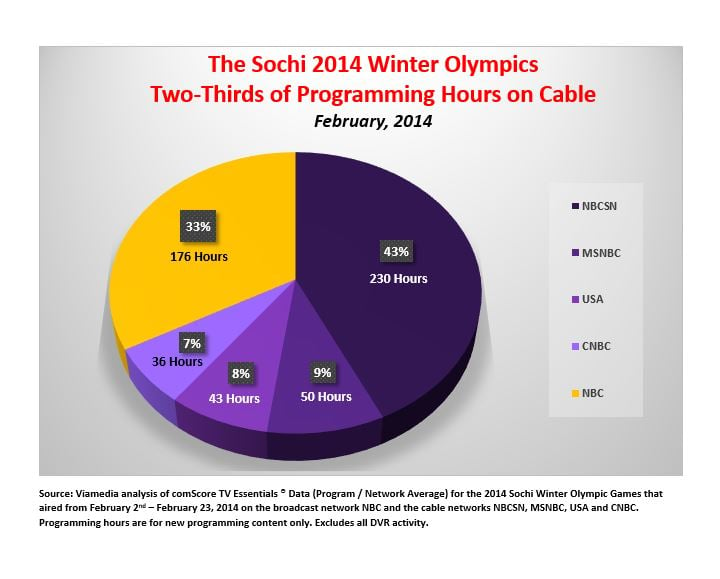 More Cable Programming Than Ever Before!

Not to be outdone, ad-supported cable will air 450 hours of Olympic programming from PyeongChang — an increase of 25% from the 2014 Sochi Games. NBCSN will once again carry the bulk of Olympic programming (360+ hours), and for the first time the network will be telecasting live in primetime throughout the Games.

At the 2014 Sochi Olympics, ad-supported cable turned in a solid Live .86 U.S. household rating (good for a 2.36 share). But these are averages which obscure the variation in viewing between the four cable networks that telecast the Winter Games four years ago: 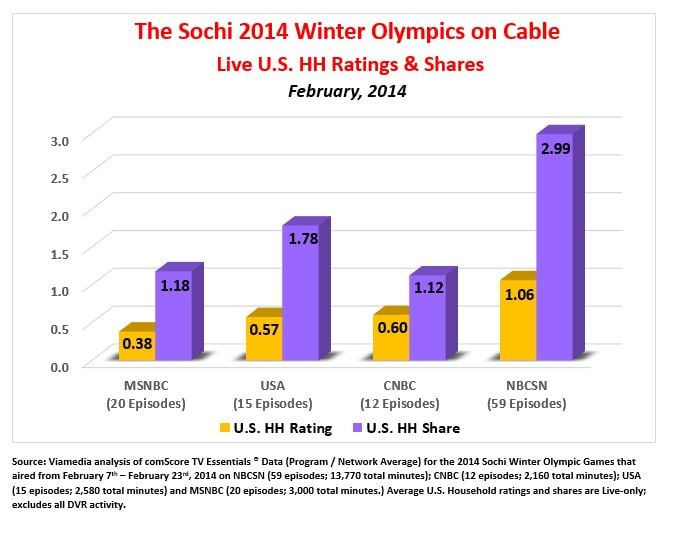 As of this writing, the 2018 scheduled events for each cable network have not yet been set, but based on the 2014 Sochi Winter Olympics it’s a good bet you’ll see a variety of Nordic skiing events, as well as speed skating, figure skating and curling.

But whatever the events may be, the Olympics on cable are sure to attract a highly educated and upscale audience. And that’s because the quadrennial games tend to attract light-tuning households, which by definition are homes with higher than average annual incomes. Below are the ratings by household classification for the 2014 Sochi Winter Olympics. You can see that the ratings peak for comScore’s highest household income classification $250,000+ (149.4 Index). And since education is highly correlated to income, cable viewers index highest for College and Graduate School (114.0 and 122.5 Index respectively): 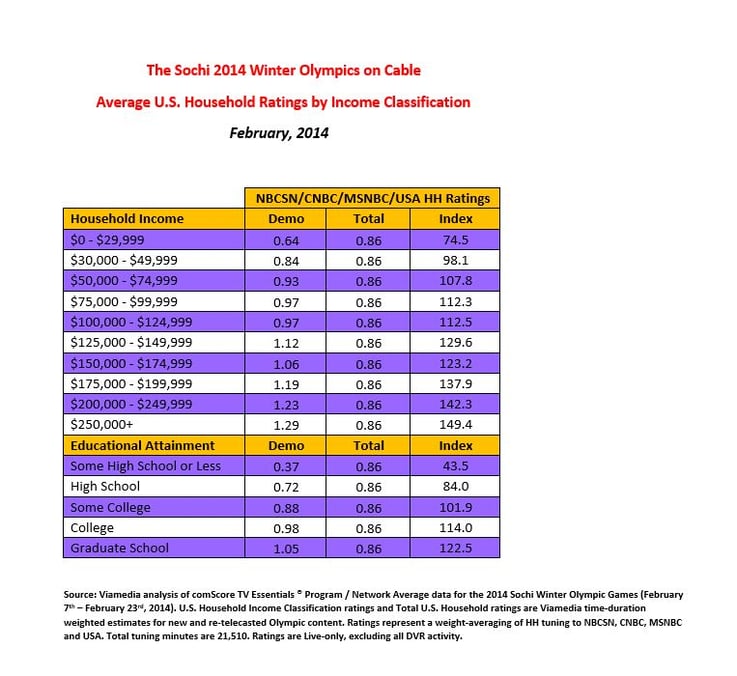 To get a sense of regional viewing skews for the upcoming PyeongChang 2018 Winter Olympics, we selected the Top 25 DMAs with the highest ratings from the Sochi 2014 Games. Given that several events are recreational staples in the North (such as skating and skiing), it’s hardly surprising that 23 out of the Top 25 viewing DMAs are located in northern markets. Indeed, nine of these markets are located within states of the Mid-Atlantic Census Region. And overall, many of the highest rated markets are quite bone-chilling in the wintertime, such as Buffalo, Utica and Elmira in New York State… and Duluth, Minneapolis and Rochester in the state of Minnesota: 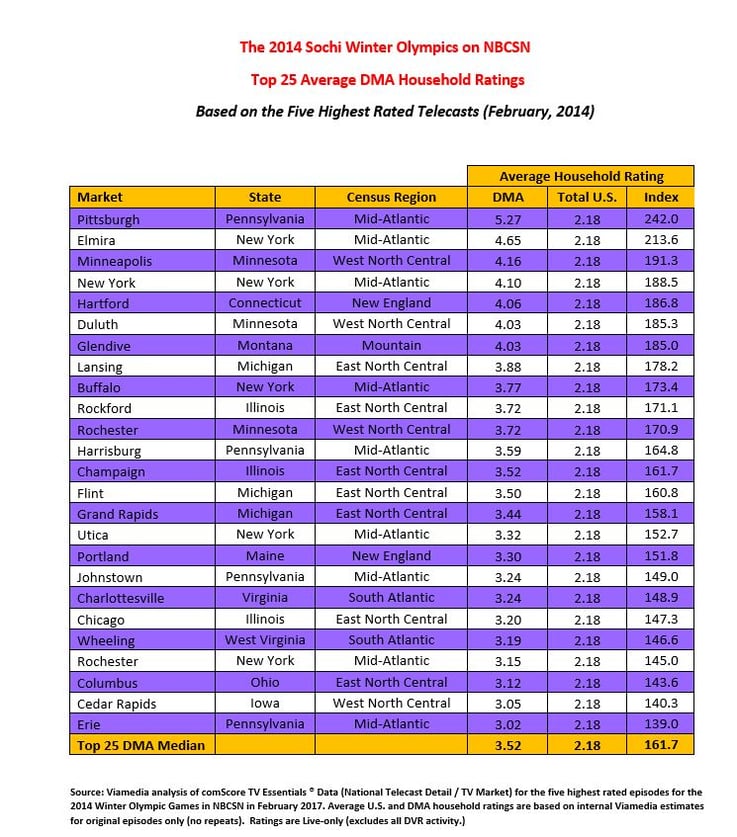 Of some note is the fact that there is a significant divergence in local market appeal between the Winter and Summer Olympics. Both attract upscale audiences, but they are not concentrated in the same markets. In looking at the Top 25 DMAs from the 2014 Sochi Winter Games, there are only three markets in common with the 2016 Rio Summer Games. Moreover, the 2014 Sochi Games had only one western market; in sharp contrast, the 2016 Rio Games had a very strong western market skew with eleven DMAs located in the Mountain and Pacific U.S. Census Regions!

Beyond a comparison of just the highest viewing DMAs, we decided to compare ratings for the two Olympics across 200+ DMAs. Below is a scattergram of each and every DMA (represented by purple dots) plotted against the rating for 2016 Rio Summer Olympics (horizontal axis), versus the 2014 Sochi Winter Olympics (vertical axis). Notice that, while there is a slight drift of the DMAs from the lower left to the upper right, the relationship is not a strong one with many DMAs scattered far above and below the straight line (which represents a perfect 100% correlation). Indeed, the correlation between the two sets of data is quite weak (r-squared = 11.4%). In other words, only 11.4% of the variation we are seeing in DMA ratings for the Winter Olympics can be explained by a variation in the DMA ratings for the Summer Olympics. That leaves nearly 90% of the variation in DMA ratings unexplained: 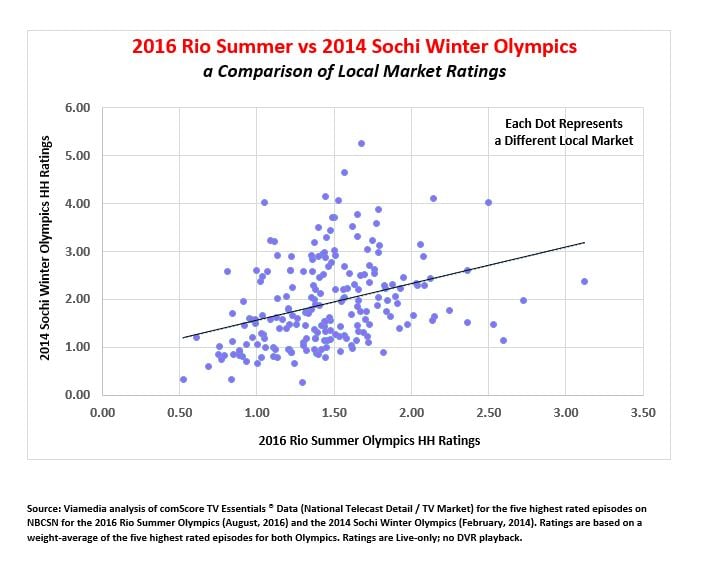 Four years ago, the 2014 Sochi Winter Games attracted very strong support with over 160 clients ordering a remarkable 17,000+ spots across 45 Viamedia markets (nearly 60% of our national footprint). That comes to an average of over 100 spots per client – far surpassing any series or major programming event we’ve covered in this space before! And what is crystal clear from the graph below is that many of our local clients maintained a tremendous amount of advertising weight throughout the entire Games, thus maximizing reach with their Olympic schedules: 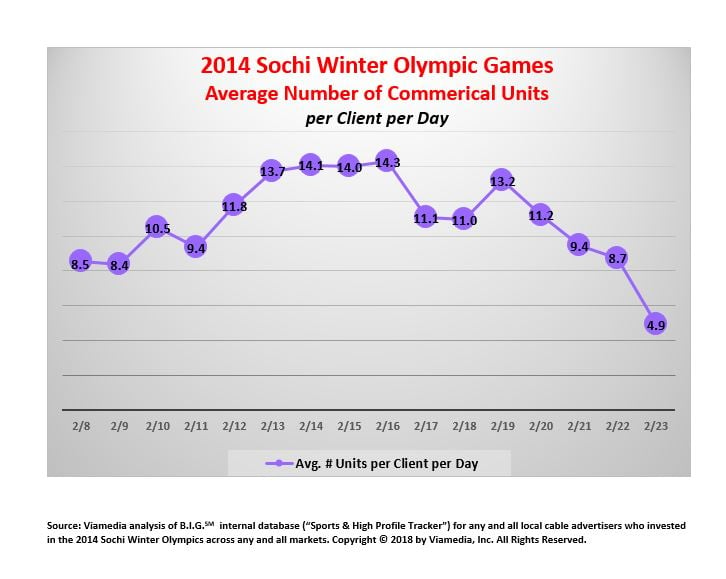 In terms of local product categories, Automotive leads the way with a 41% share of cable advertising – a figure that is roughly ten share points higher than what we normally see for this category company-wide. And although the next four highest categories combined (Entertainment & Travel, Attorneys & Professional Services, Food & Grocery and Beverages) generated a share level less than Automotive, their collective share of 27% is in fact three-times higher than their share company-wide: 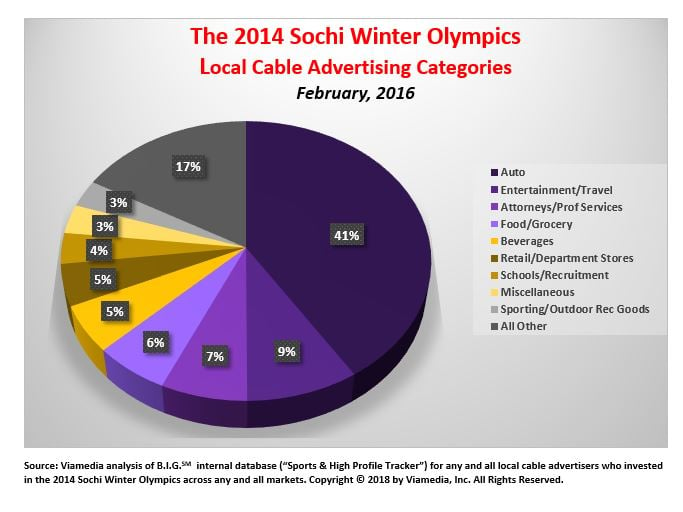 The Olympics are often referred to by the name of the host city or town; thus, London 2012; Sochi 2014; Rio 2016, etc. But PyeongChang is neither a city nor a town… it is in fact a county, and the Games are actually taking place in the township of Daegwallyeong-myeon (that is not a misspelling), and the coastal city of Gangneug, snug up against the Sea of Japan. According to Wikipedia, the close proximity of the two areas (with their respective sporting venues) was a key reason for choosing South Korea for a second time (the first being the Seoul Summer Games of 1988.) And for two-and-a-half-weeks in February, this very small corner of the Korean Peninsula – less than fifty miles from North Korea — will be the scene of intense athletic drama that will attract the attention of viewers from around the world.

Let the Games begin… in peace!