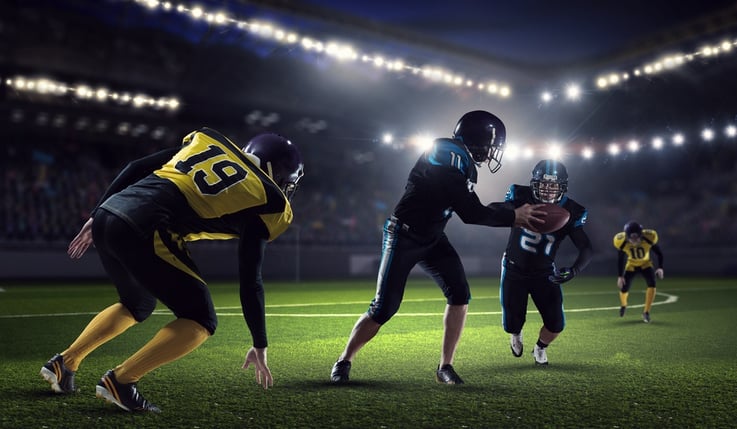 Great college football games have always been a staple of ad-supported cable television, and make no mistake about it… ESPN is the “stapler.” Out of something like 40 College Bowl Games last season (2016-17), ESPN carried over three-quarters of them, delivering a solid Live average U.S. household rating of 2.6 (and a 5.8 share.)

If you are a college football fanatic (and count me in), then December is -- as Andy Williams once  crooned -- “…the most wonderful time of the year,” with dozens of Division One College Football Bowl games on tap, beginning on the 16th and culminating in the January 8th, 2018 College Football Playoff National Championship.

Great college football games have always been a staple of ad-supported cable television, and make no mistake about it… ESPN is the “stapler.” Out of something like 40 College Bowl Games last season (2016-17), ESPN carried over three-quarters of them, delivering a solid Live average U.S. household rating of 2.6 (and a 5.8 share.)  Source:  comScore TV Essentials ® Data Telecast Summary Report

But a note of caution.

After several years of audience growth, the 2016-17 College Bowl Season was tackled with the same force that hit professional football – an erosion in viewing, which was off double-digits in both average rating and share. There are several explanations, including lower HUT levels as viewers slowly (but surely) migrate to all things digital, as well as a surge in cable news viewing that carried well beyond the early November Presidential Election. Another issue may simply boil down to the age-old expression, “too much of a good thing,” as the sheer number of games continues to expand:

This upcoming bowl season represents the fourth year of the current college football playoff format in which the top four ranked teams in the nation (i.e., after the final regular season game) vie to be crowned the National College Football Champion. As you can imagine, there is always some controversy swirling around rankings of any sort (which has become a sport unto itself), but there was never a doubt that the playoff bowl games would generate tremendous fan interest. Last year’s games were no exception with the National Championship Game between the Clemson Tigers and the University of Alabama generating a 10.44 U.S. Household rating (good for a 19.32 share): 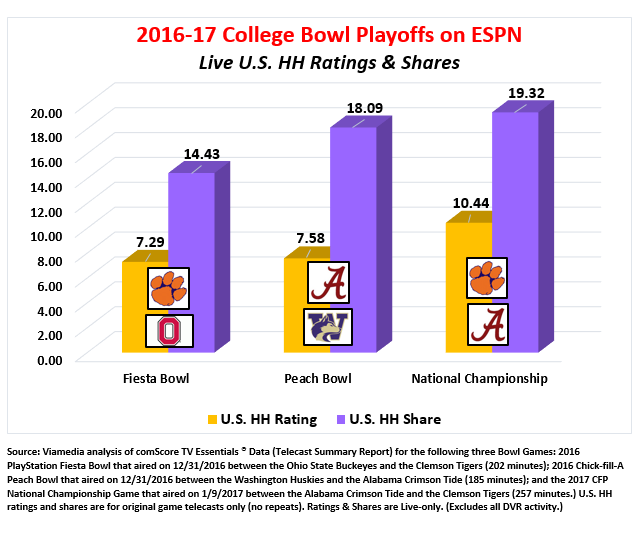 We’ve noted in several past sports-oriented blogs that national cable ratings are just the tip of the iceberg, and that local market viewership goes through the roof when home teams are involved in national telecasts. The top seven highest rated DMAs for last year’s National Championship Game are all located within the home states of the participating teams, Clemson (South Carolina) and the University of Alabama: 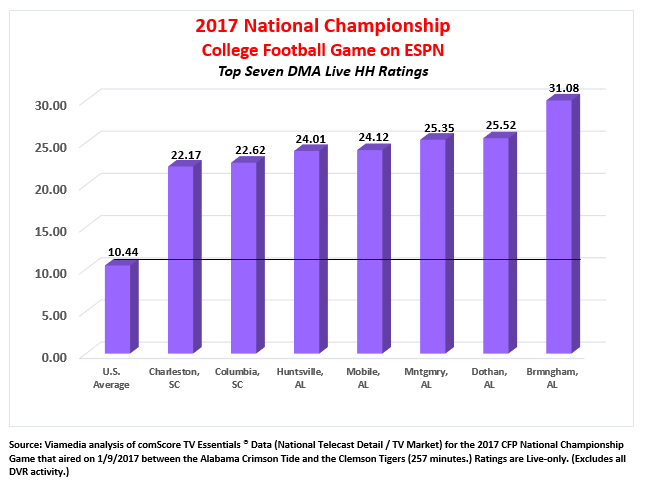 College Football Bowl Games on ESPN pack a double punch – a large, highly engaged audience that also happens to be upscale. As can be seen in the chart below, the household ratings by income top out at $175,000 - $199,999 (123.2 Index). And higher incomes are also associated with a better educated viewer (Graduate School Index = 120.6): 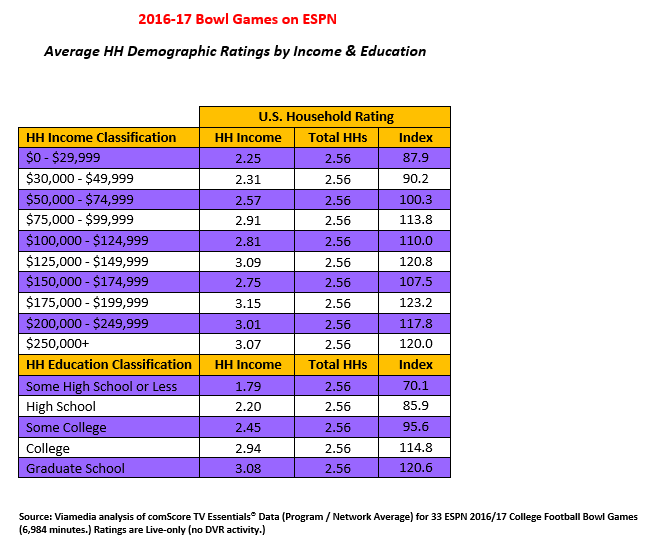 In terms of local cable advertising categories, football (any football, collegiate or professional) is a magnet for automotive dollars. Over the past two seasons, 400 local automotive dealers and manufacturers ordered 12,900 spots in college football bowl games. In all, they represent 47% of all advertising investments. The second largest category – financial -- captured 11% of all category sales which is more than double the level we typically see for this category company-wide: 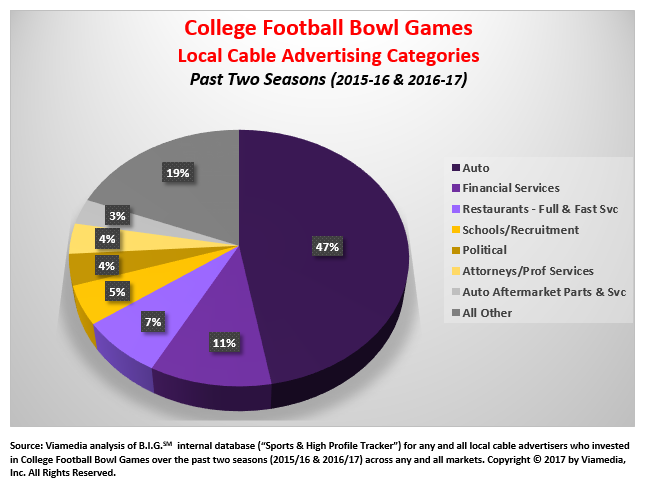 There’s an old saying that great college football programs never rebuild… they just reload. And look no further than the University of Alabama and the Clemson Tigers, who have met the past two years in the College Bowl Championship Game. Both teams find themselves once again in the Final Four.

But I’m getting way ahead of myself, and there’s quite a lot of college bowl football before the Championship Game in early January. For college football fans, and local cable advertisers seeking to reach them, it doesn’t get any better than this! Let the Bowl Games begin.